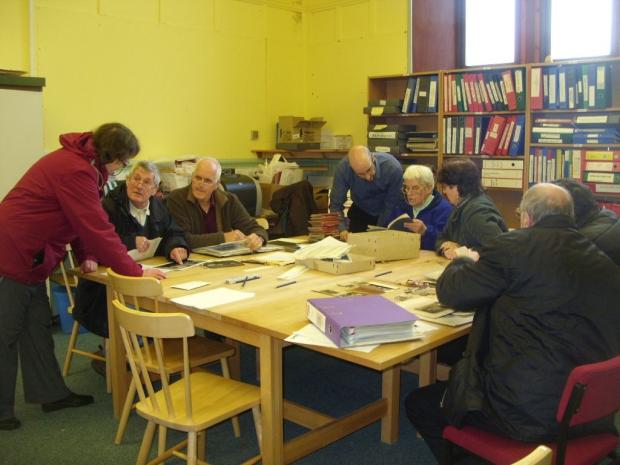 Comunn Eachdraidh Nis gained national quality standard in December 2010 as an Accredited Museum from the Museums, Libraries and Archives Council (MLA) which sets nationally agreed standards for museums in the UK. This was quite an accolade for a small voluntary group. However it became increasingly obvious that to retain this standard, major works would have to be carried out to the premises in which the comunn was based.

It has an extensive display of artefacts, photographs, croft histories, sound and video recordings, newspapers cuttings and extracts from other published material.  Most of the Society’s archive has been digitised and there is ongoing work linking the photographic collection with the croft histories and updating the genealogical information held.

CEN also produces an in-house magazine, Criomagan and other publicationsand has recently released CD Na Nisich 1.  In 2011 the focus was on the history of Cross School.

The society receives hundreds of requests for information from around the world and issue their in-house magazine Criomagan to around 400 members.  The magazine is self supporting through advertising and membership subscriptions are set at £10.00 per year.

Current income comes from fundraising events such as soup and pudding lunches for the local community.  They also hold free exhibitions and request donations at these events.

What was the challenge that caused this project to be initiated?

Until recently the society was housed in a variety of homes throughout the years. In 1984 they moved to more permanent premises in Lionel Old School and then again to larger premises in Habost in 1992.  As the societies archive grew further, these premises became unsuitable to house the collection.  An area of storage in the back of the building registered 100% on the hygrometers (measuring humidity) which had been set up to ensure that the material was being stored in a safe environment.

Following a feasibility study it was determined that a new building would be required as refurbishment would be too expensive.  On learning of the Comhairle nan Eilean Siar’s (Western Isles Council) plans to close Cross School, the CEN board considered that relocation to Cross School would be preferable to the refurbishment of the Habost premises.

The Cross School building is an historic building in its own right and is centrally located.  Parking is a major issue in Habost, particularly for coaches, and the Cross site has extensive parking facilities.  In June 2011, CEN was successful in acquiring title to Cross School – turning a bad news story of the closure of the school which had served the local community since 1879 into the possibility of developing an exciting new educational facility for the area.

The Cross School had become available when the school role fell and children were sent to another school nearby.  In 2010, after discussions with Comhairle nan Eilean Siar – the local authority - which indicated that the school might be available for use by the Society, a community consultation gave 100% support to the plans.

A price of between £60-70K was put on the property.  However, the Comunn were willing to forego funding which had been earmarked within the council’s capital programme for the society to upgrade the Habost premises.  This was used to offset the cost of the purchase price and a piece of land owned by the society was also used in part exchange.  Thus the society had no need to find any funding to purchase the building.

They moved into the vacant Cross School at the beginning of November 2011 and began the task of unpacking hundreds of documents, photographs and artefacts.  The society hopes to be in a position to open to the public by Easter 2012 for access to the archives as well as open a café.  By mid March the Comunn had also been able to secure LEADER and other funding for a 2 year post for a Co-ordinator and Archivist as well as a part-time cafe/Gaelic conversation assistant.

Work continues to find funding to transform the building so that it is fit for purpose, reduces running costs and allows the archive to grow in the future.  In particular, the group are looking at reducing CO2 emissions by increasing the insulation of the building, and are exploring the possibility of erecting a wind turbine to generate income from feed in tariff.

Current plans for the transformation of the building will include development as:

There are also immediate plans in the pipeline to refurbish the toilets to provided disabled and adult toilets, and to develop a welcoming reception area.  In the future it is hoped to restore the adjoining schoolhouse into accommodation for students and Gaelic medium school pupils and also to develop the former school canteen.